As a second year doctoral student at Drew University, I have the privilege of studying theology with Catherine Keller. Probably like a few other bloggers at AUFS who have also been Keller’s students, I cannot pretend to lack a bias in favor of her work – perhaps especially in the case of her Cloud of the Impossible. But I do hope that my perspective as one of her students enables me to make a worthwhile contribution to this discussion. For this post, I would therefore like to share my sense of the way that 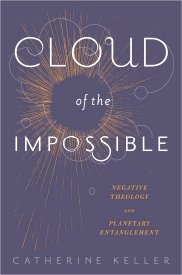 Keller’s Cloud panentheism seemed to evolve over the last year of the book’s composition. Hopefully this consideration of her philosophical theology will stimulate some discussion for those interested in such themes.

During my first semester at Drew, I enrolled in Keller’s course on apophatic theology in which we read a draft of her Cloud. Although my overall response to it was positive, this early manuscript also caused me to question what she really meant by “God.” In my reading, she was extremely cautious in making any affirmative statements about the divine. While this is partly understandable for a book on negative theology, apophatic and kataphatic theology go together (as Keller often points out). Without a kataphatic moment or two, apophasis would seem to function as a mere wrecking ball. I also wondered if constructive God-talk had become a distraction from her seemingly more urgent interests, such as climate change. Does she really affirm panentheism – and if so, why? Is it on purely pragmatic grounds to provide support for her ethical and political concerns? Might she be persuaded by some contemporary argument for the existence of God? Could it be her fidelity to Whitehead’s philosophy, which includes a “divine element” that performs crucial metaphysical functions? Or would she affirm God because of certain mystical experiences that she couldn’t explain away?

Keller was actually surprised by these questions: she felt like she had said too much about God in the early draft of the book! In response, I asked if she would differentiate her position from two very different theologians who are referenced in the Cloud: John Caputo and Philip Clayton. Unlike Caputo’s post-Tillichian “a/theism,” Keller made it clear that she isn’t denying God’s existence – unless one means the omni-God of classical theism and substance metaphysics. That God is dead to her, to be sure. On the other hand, she hesitated to agree with Clayton’s minimalist apologetics for God’s existence that he develops through process thought and contemporary science. As such, Keller seemed to locate her position somewhere between Clayton’s pragmatism and Caputo’s deconstruction.

While I left this conversation with lingering questions, I had a stronger sense that Keller is serious about her commitment to constructive theology. Her constructive theological sensibility was confirmed to me during the following semester when she told some of her students that she had been in discussions with Clayton Crockett about publishing the Cloud in the Insurrections series at Columbia University Press, for which he is one of the editors. At first, Keller half-jokingly told him that “my God is not dead enough” for that series (which tends to publish non-theistic philosophers). Crockett humorously responded to her that Insurrections is “not really that orthodox.” He was apparently persuasive because Keller did end up agreeing to publish the Cloud with Insurrections.

For all of the unsaying going on in the published Cloud, Keller now says quite a lot about the God she humbly affirms. Compared to the earlier draft that I read in 2013, she more clearly explicates a kataphatic theo-logic alongside her theo-poetics. It is thus her theological affirmations that I want to focus on for the rest of this post. Keller’s Cloud has many layers to explore, and one probably does not need to be any kind of theist to gain something from it. But there is indeed a panentheistic thread running throughout this text, from start to finish.

For anyone anticipating a radical theology from Keller, the Cloud might come as a surprise. Yes, one could say that there are “radical” elements here that resonate in a number of ways with some self-described radical theologians (e.g., Crockett, Robbins, Caputo). Process and radical theologians have long been important conversation partners, going back to Cobb and Altizer’s friendly debates that began in the 1960s. But even if the Cloud is conversant with radical thinkers, it is probably better described as a progressive theology that invites both Christian and post-Christian readers to the table. Keller thus closely aligns her work with Elizabeth Johnson’s apophatic feminist theology: both of them hope to minister “to passionately dissident Christians,” even as Keller also wants to offer “hospitality to those whose faith is more kin to deconstruction” (44). These commitments lead her to draw on both poststructuralist philosophers and other Christian theologians like Kathryn Tanner, James Cone, and Jürgen Moltmann. She also remains close to her tradition of Whiteheadian process theology that she absorbed from her teacher at Claremont, John Cobb. And of course, Keller dives deep into the Christian mystical tradition, oscillating between apophatic and kataphatic theological statements throughout the text. As she explains early in the book, her approach is to “say differently rather than cleanly erase ‘God’” (10-11). Reflecting on the death of God, she then wonders: “Does ‘God’ quite capture what is dying? Is God the name of the problem whose death is the only honest solution? Which God?” (28).

Already in her Face of the Deep, Keller similarly developed the panentheism that we find in the Cloud. Her tehomic “Manyone” is repeated in the Cloud as the divine “pluralisingularity” (314). Partly as a way of resisting ontotheology, where God is the One entity or Being, Keller offers a close reading of Cusa’s apophatic panentheism and relates it to Whitehead’s divine poet. The similarly relational God of both thinkers can be understood as the enfolding infinite and the unfolding source of infinite possibilities (posse ipsum). By speaking of divine power in terms of “attraction,” Cusa also anticipated Whitehead’s divine lure by a few centuries (96). While Cusa did not deny omnipotence like Whitehead, Keller points out that he denied “its standard meaning.” Like Whitehead, Cusa thus argued that “the agency of no creature is diminished by divine influence” (106). As Keller explains their similar positions: “it is truer to say that this posse ipsum is actualized than that it acts: it does not make but makes possible the actual creature…” (112). But if Whitehead radicalizes Cusa by making the divine fully dependent upon creaturely contributions (108), Cusa offers back an apophatic relationalism that one rarely finds in the tradition of process theology. For Keller, this coinciding of Cusa’s apophatic panentheism with process-relational theology can “check the latter’s particular temptations to objectification” (109).

At certain points in her physics chapter, Keller almost seems to ground this panentheism in a kind of cosmological argument for God. This will undoubtedly make some readers suspicious. While she does not want to be mistaken for an idealist or for claiming a “God of the gaps,” she references the physicist Henry Stapp’s view that “it seems difficult to imagine…how physical laws could come to be fixed by a purely physical, mindless universe” (145). This suggests an argument for a kind of panpsychism, if not also a process panentheism. After all, many process theologians have more explicitly made claims for God’s existence based on such cosmological speculations (e.g., David Ray Griffin, John Cobb). Keller also references the physicist David Bohm who suggested our participation in a “yet more comprehensive mind going indefinitely beyond” (162). Even if these physicists seem to hint at something like the apophatic panentheism of Keller’s Cloud, she reads them as “conjecturing – not proving” such a position (164). So although she clearly rejects a God-entity that fills gaps in our current knowledge, Keller does wonder if some might find the following proposition plausible: “is God one beclouded name for an infinity enfolding it all psychosomatically together – and simultaneously provoking all its open actualizations?” (145).

At this point, one might ask what Deleuze is doing in this book of constructive theology – that philosopher who once defined theology as the “science of non-existing entities.” Keller has written before about Whitehead’s significant influence on Deleuze. Part of what Deleuze offers to Keller’s project is a metaphysical style of poststructuralism that resonates with Whitehead and updates some of the latter’s terms and ideas (see Keller’s amusing metaphysical “confession” on page 171). Largely because Whitehead was himself a metaphysician, he has remained a marginal figure in philosophy departments. But along with a ‘Deleuzean turn’ in continental philosophy has come a renewal of interest in both metaphysics and Whitehead’s philosophy, as in the works of Bruno Latour, Isabelle Stengers, and Steven Shaviro.

Unlike Whitehead’s thought, Deleuze’s atheistic philosophy would seem to dissolve all God concepts. Keller minds this divergence between process theology and what she calls the “true Deleuzeans” (195). She is aware that “Whitehead and Deleuze are not one” (176) and admits that, at a certain point, she will “diverge from Deleuze in the direction of his much older sources” (180). And yet Keller proceeds to relate the two: “God is not dead but becoming…the generative atheism of Deleuze, close to pantheism, may not so much contradict as darken the panentheism of Whitehead” (172). Looking to Deleuze’s Cusanic trinity of the complicatio-explicatio-implicatio, she reconstructs Whitehead’s consequent, primordial, and superjective divine natures. God thus becomes a multiplicity, a “deterritorialized and deterritorializing deity” (186). This divine multiple is therefore not ultimately transcendent, but an “infinite creature” of the tehomic creativity, Whitehead’s democratizing ultimate. As Deleuze noted in The Fold, Whitehead’s God has become a process like all other processes. Thus for Keller, “God the mediation of groundless creativity and manifold creatures is not only rendered composite, collective – but infinitely so” (189). But again, she admits that her God of love “rings too compassionate” for a strictly Deleuzean project (192).

Keller’s deep faith in divine Love no longer seems like a distraction from her ethical and political concerns (as I once wondered). As I read the Cloud, it is woven into every aspect of this provocative and challenging book. And her use of the apophatic tradition is anything but a wrecking ball. Swinging from apophasis to kataphasis, Keller has ultimately reconstructed the process tradition’s divine “poet of the world.” However, she importantly ends the Cloud by decentering her panentheistic affirmations in order to build wider coalitions for the future of the planet: “…that for which God is a nickname cares not whether you believe in God. Doesn’t give a damn. Isn’t in the damning business. What matters, what matters endlessly, is what we earth-dwellers now together embody. Not what we say about God but how we do God” (306). Perhaps this convivial gesture will resonate for readers with divergent perspectives: those who find Keller’s panentheism attractive and also for those who find it to be…impossible. Either way, I am looking forward to the responses of other readers to this creative Cloud theology.

PhD student in Theology and Philosophy at Drew University with interests in process theology, continental philosophy of religion, and science. View all posts by Austin Roberts