Worlds without End is its own multiverse of multiverses. Probable, possible, and profoundly unlikely universes multiply across its pages, splitting off from one another in infinite trouser-legs of time, bubbling up from one another’s surfaces, emerging from the queer turns of those that precede them, branching genealogically upwards and outwards, and exploding outwards from the ruins of their predecessors. This unruly menagerie of possible worlds can be sorted, Rubenstein tells us, into a fourfold taxonomy: worlds that are spatially multiple, existing alongside one another in monadic isolation or chaotically colliding like cosmic dodgems; worlds that are temporally multiple, phoenix-universes born from one another’s ashes, rising from the dead either changed or unchanged by their descent into the hell of nothingness; worlds that make free will not the rupture internal to an inconsistent order of being but the sliding-door birthing-points of new and parallel universes where everything is the same but for that one decision; or modal universes in which everything that could exist, does exist, over and over again, unendingly.
Yet for all this multiplicity, the multiverse whose contours emerge as the frame of Worlds without End is ultimately one of the eternal return of the same; a cosmology which – Rubenstein tells us – Nietzsche inherited from the Stoics, and which surfaces partially in Kant, then is reborn once again in the new ekpyrotic model of Paul Steinhardt and Neil Turok. 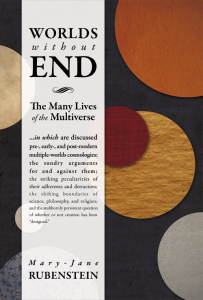 Just as for Epicurus there may be ‘an infinite number of atoms’ yet only ‘a finite number of types of atoms’ which ‘means that any given configuration is bound not only to occur, but also to recur – infinitely’, so too for Rubenstein we can trace back even the most speculative and secular of contemporary multiverse theories through that old familiar history which runs from Kant to Newton, to Kepler, to Descartes, to Galileo, to Nicholas of Cusa, to Thomas Aquinas to Augustine, to the Stoics, to the Atomists, to Aristotle and finally, in the beginning, to Plato. This particular phoenix universe is one that runs, as S Sayyid would say, ‘from Plato to Nato’ – with, of course, a crucial passage through Christendom. Rubenstein sets out to uncover a ‘more complicated story’ from beneath the hegemonic belief in the uniqueness of the cosmos, exploring at the margins of the line which runs ‘from Plato to Einstein’ in search of traces of ‘bold openings, frightened foreclosures and radical retrievals of cosmic multiplicity’ that undermine this ‘linear reign of singularity’. Yet her own narrative remains within the linear reign of a singular history of a single world brought into being by the first mover of Greek philosopher, running from classical Hellenic philosophy to Christian-Platonic theology to the emergence of secular science. There is no way to think the multiverse, it seems, which does not ultimately recall the Greek origins of the Western tradition, which does not ultimately keep open the possibility of the Christian creator God.

Or is there? Contemporary researchers of the Cosmic Microwave Background seek to find evidence of other worlds in the fuzzy interference which forms the backdrop to our cosmic observations. Specifically, they look for evidence that our universe has collided with other universes; for ‘“bruises” in the form of “inhomogeneities in the inner-bubble cosmology”’, for ‘scars’, for signs of ‘entanglement’, for hints which they describe as the ‘dark flow’. Perhaps we can detect such hints of other worlds in the margins of Rubenstein’s own narrative. For our world too, the world of white Western hegemony ‘is the product of and the material for other worlds’, is ‘constitutively bound up with an untold number of others.’ If we know where to look, we can glimpse them. They are there in the gap between chapters 2, which ends with the ashes of Stoic thinking, cast into the furnace of ignominy by Augustine’s fiery denunciation, and chapter 3, which sees the question of multiple worlds arising ‘from the ashes of the mid-thirteenth century.’ What has changed, says Rubenstein, in this millennium of silence on the question of the multiverse, is the ‘rediscovery’ of Aristotle, the ‘return of the “same”’. And yet, of course, the Aristotle who returns is not quite the same; not quite unchanged by his sojourn in the dark flow of history which takes place outside the light of Christendom; not quite untouched by his passage through the hands of Ibn Sina and Moshe ben Maimon. What other lives of the multiverse leave their mark in this crack in Rubenstein’s narrative?

There are glimpses, too, in the background hum of chapter 4’s exploration of ‘An Extraterrestrial Age’, which emerged, Rubenstein tells us, not only from the possibilities which unfolded through the lens of Galileo’s telescope but also from ‘Europe’s “discovery” of the Americas’. The ‘unfolding extraterrestrial debate opened a number of anthropological and theological questions that were remarkably similar to those concerning non-European humans’; what might these other worlds, these other creatures like, but not quite like us, be like? What indeed? Later on in Rubenstein’s narrative, the 20th century ‘oscillating model’ of the universe ‘collided head on with Hindu cosmology’. Yet this collision opens up no new worlds to explore but, instead, ‘perhaps even a tacit confirmation of the cyclical model’s transhistorical, cross-cultural truth.’ There is even, Rubenstein points out, a chasm, an inhomogeneity, between ‘the God of the philosophers’ and ‘the God of Abraham, Isaac and Jacob.’ Yet these momentary glimmers of other worlds go, for the most part, unexplored.

What holds Western science, philosophy and religion together, Rubenstein suggests, is their common participation in the aesthetic ideals which are, for Nietzsche at least, ‘Europe’s Christian inheritance’. All three hold to the belief that there is a truth outside of us, a truth which we might gain access too if only we pursue it unconditionally. Yet this aesthetic pursuit of transcendence is also, for Nietzsche, profoundly nihilistic, ‘reducing the whole world to nothing.’ But it is not this world which is reduced to nothing in the quest for other worlds whose genealogy Rubenstein traces. Instead, in the pursuit of other worlds which Rubenstein finds at the heart of the Western metaphysical tradition, it is, paradoxically, precisely those worlds outside of our own which are cast onto the fire. We can imagine ourselves as the computer simulations of alien experimenters and yet not, it seems, as entangled in any worlds outside the hegemony of whiteness. Perhaps, like Plato, we believe that the ‘oneness of the cosmos ensures the permanence of the cosmos’, and seek to ensure that no other universes can survive, so that we might. Perhaps, like all creationist cosmologists, we begin from ‘the false premise that our world is particularly well suited for human flourishing’, unable to contemplate the Lucretian assertion that it is, in fact, ‘profoundly flawed’. Perhaps, like the Scholastics after 1277, we believe in our hearts that ‘although God could create worlds other than this one, he never would.’ Whatever the cause, it would seem that we have still to come to terms with what the physicist Lawrence Krauss described as ‘the ultimate Copernican Revolution’: the discovery of dark energy; the discovery that darkness matters.

What are we to make of a world, our world, which affirms the possible existence of multiple universes like and unlike our own, real and simulated, close and far away, and yet cannot recognise the existence of other worlds already present on earth, already crashing against the limits of our imaginary universe, already visible in the cracks within our history? Worlds without End closes with the discovery of hope in the ‘persistence of chaos amid anything that looks like order’, with the opening of a possibility of ‘a theology that asks more interesting and more pressing questions than whether the universe has been “designed” by an anthropomorphic, extracosmic deity.’ The last line of Words without End urges, ‘So let us begin again…’ Perhaps we might embark on this new beginning with the words of Aimé Césaire ringing in our ears:

‘What can you do?’
‘Start’
‘Start what?’
‘The only thing in the world worth starting: the end of the world, of course.’’

View all posts by Marika Rose

21 thoughts on “The Singular Whiteness of the Multiverse”