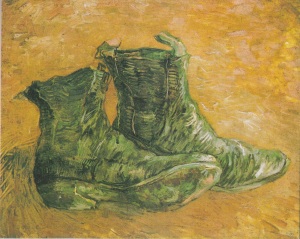 I’ve been working through Hegel’s Phenomenology of Spirit in painstaking detail in a tutorial with a very motivated and long-suffering student this semester. This week, I started Heidegger’s Origin of the Work of Art in another class, and I was struck by a close correspondence between the three faulty conceptions of the thing (substance/accident, object of sense-perception, and formed matter) and the first three steps in Hegel’s section on “Consciousness” (sense-certainty, perception [which amounts to substance/accident], and matter subject to forces). They come in a different order, but basically the same three views are in play. The divergent sequence could be meaningful — since Heidegger views Aristotle as expressing the most originary Greek experience of thinghood, while according to Hyppolite Hegel is thinking of the pre-Socratics in the sense-certainty section — or it may not be that significant given that they both issue in a similar third step.

And then both of them further open out into the inter-human world: the peasant woman with her shoes, the master and slave with the various objects of use and labor, etc. It’s interesting that for Heidegger the conflict is not between human beings, but between the human world and the earth that resists our efforts to establish that world — and yet there is conflict all the same.

Other random reflections: Hegel is trying to move forward to a more fully-articulated view while Heidegger is trying to clear our preconditions to get to a more originary experience of Being — and yet both are fundamentally proceeding by way of explicating the necessity of mistakes on the way to the “correct” view. Heidegger had done his seminar on the Phenomenology several years prior, so there’s not necessarily a philological “smoking gun” here.

I’ll have to give this more thought as we work through the remaining two sections of Heidegger’s essay over the course of this week. Meanwhile, I invite you to chime in with your profound thoughts.