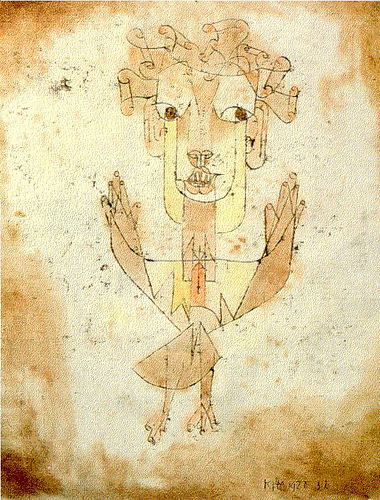 Benjamin’s “Theses on the Philosophy of History” relentlessly attack the notion of any form of necessary social progress, whether liberal or Marxist. In the current election cycle, we may be witnessing a fresh “now of legibility” for this much-quoted text. Who can follow the bizarre events unfolding before us and still hold onto the illusions that the arc of history — or demographic change — will “automatically” save us in the end?

“Progress” in the conventional sense is simply not on offer here, in large part because we’ve had decades of “regression” in those terms. In the ostensibly “progressive” party, we are offered a choice between perhaps the most authentically conservative candidate in recent memory — Hillary Clinton, who promises to fight to keep things exactly as Obama left them — and an opponent who, in terms of the “progress” of recent history, counts as nostalgic and even regressive — Bernie Sanders, who wants to restore the elements of the postwar settlement that have been eroded and destroyed. To go forward, we must go back.

Meanwhile, on the ostensibly “conservative” end of things, we have people who are either “progressive” in the sense of wanting to hurry along existing trends (the neoliberal “Republican establishment,” such as it is) and outright revolutionaries — most notably Trump, but also Cruz. While much of their rhetoric seems “regressive” in the traditional “things should get more lefty” terms — how can anyone “still” embrace the KKK, for instance? Buy a calendar! — in reality they are offering us something unprecedented, something we truly cannot predict. The superficial nostalgia of “Make America Great Again” should not hide the fact that nothing Trump or Cruz is proposing is actually a “return” to any previous era. The embrace of white supremacy at the current moment, for instance, means something radically different than a similar move would have meant when even abolitionists were pretty much racists.

We can see the same thing on the state level. Bruce Rauner is not aiming to return Illinois to some previous state — he wants to impose an unprecedented arrangement upon it, and to achieve that he appears to be willing to literally shut down all state agencies for his entire term if need be. Here the Democrats are most vividly the conservative party, the party that is in favor of having a state government at all. And the telling thing, I think, is that — due to Rauner buying off a Democratic legislator — the Democrats are one vote short of the supermajority needed to render him totally irrelevant to the political process. All it would take is one Republican to say, “My God, this is lunacy” and it would all be over. And not a single one will.

We see a similar dichotomy in the response to public pressure. Republicans, going all the way back to George W. Bush, simply do not care. They’re going to do what they’re going to do, and the only question is when they’ll get bored of the spectacle and call in the national guard. Democrats, by contrast, are the party of at least pretending to respond to protest. Illinois offers an instructive example here: there have been countless fruitless protests against Rauner, but the terrible, corrupt, conservative Democrat Rahm Emanuel has made some token gesture toward meeting protestors’ demands and even allowed protestors to disrupt Christmas shopping unmolested. His responses have been token at best, but even Rahm — who is surely the very worst the Democrats have to offer — acknowledges and responds in some way.

This is why I distrust all those who smugly inform us that Trump’s most outlandish plans are a dead letter. Presumably this is because of institutional constraints — but since when are Republicans known for working within institutional constraints? During the Obama years, they have systematically weaponized those constraints, turning the fillibuster into a de facto minimum vote threshold, repeatedly playing chicken with the debt ceiling, and now flatly refusing to entertain any Obama nominee for the Supreme Court. They have fought aggressively from a position of virtually unprecedented weakness and repudiation, and they have been rewarded electorally.

Does this mean that Trump really will carry out the most massive population transfer in human history? I don’t know. I hope not. But we can’t rule it out. We can’t rule anything out. He would be the commander in chief of the United States armed forces, and he would have Republican allies at all levels of government, who control militarized and deeply racist police forces. Will the Republicans in the Senate literally let the Supreme Court die off one by one before they allow a Democrat to confirm a new justice? I don’t know. I hope not. But they could. They have the power to do that. Similarly in Illinois, do we really know that Rauner won’t continue his crusade for all four years? I don’t know. I hope not. But he could — there is nothing compelling him to sign any budget ever — and I don’t think we really know what that will look like for the state to be shut down for four years. And then we don’t know that he won’t be reelected.

In any case, demographics will not save us. The longer they’re in power now, the more opportunity they have to entrench their power. Conservative overreach will not save us. The more public institutions they destroy, the more they destroy the constituencies for them. Trump won’t lose automatically, because neither Hillary Clinton nor Bernie Sanders can fully control events. The normal back and forth of politics, the trends and data, will not save us — because the unprecedented can and does happen. It is happening before our eyes.

7 thoughts on “The astonishment that such things are “still” possible”