One of the central functions of angels in films is to do the work of producing and reproducing the heteronormative family. I think this is to do with a mixture of the idea of the guardian angel and the increasing association of religion with the home, the private sphere, and social reproduction which follows on the emergence of capitalism and the seculaization of the west. Because angels work to make sure that people meet, fall in love, and have children, angel films often tell us a lot about contemporary anxieties around love, marriage, and the family. It’s also the case that a surprising number of angel films are remakes of earlier angel films; I’d guess partly because angel films are rarely pushing the boundaries of film, art, or culture. But that means we have a number of films where we can take a look at the way that the same story is told in two or even three different periods. 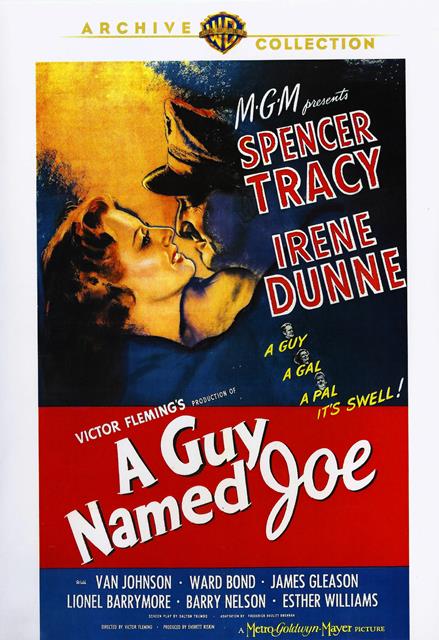 One example is A Guy Named Joe (1943, dir. Victor Fleming), which is remade in 1989 by Steven Spielberg as Always. A Guy Named Joe is set during the second world war. Pete, a daredevil fighter pilot, is constantly getting into trouble for taking risks whilst trying to bomb Nazis. He loves his girlfriend, Dorinda, though he feels uncomfortable about the fact that she’s flying planes. Dorinda worries that Pete will die, wants him to marry her, and to take a safer job training younger pilots. He buys her a pretty dress, she asks him to take her flying with him, he says that when he flies for fun he does it alone. He says, ‘You know how I feel about women in the air. Get a desk job and I’ll take you up’. She says, ‘Wrong gal, Pete. Wrong time’. She says that they should get married; he refuses. Because he’s a dangerous flier who won’t take orders, he’s sent up to Scotland, away from the action. Dorinda comes to visit him, convinced that he’s going to die. He agrees to marry her and to take up the safe training job but just then he’s called out urgently to attack Nazi aircraft carriers off the coast and he dies. He arrives in heaven, meets a dead friend, and is introduced to ‘the commanding officer’, an old white guy in military uniform, who tells him that although he’s a very good pilot, he needs to realise that no one is brilliant on their own. Pete doesn’t realise it, but when he learnt to fly he was helped by the spirits of dead pilots who had gone before him. He’s sent back to earth, to the flying school, to help a good looking young pilot called Ted who also happens to be falling in (reciprocated) love with Dorinda. Pete tries to sabotage their relationship, is sent back to heaven to get yelled at by the commanding officer who says that Pete needs to understand that he has to understand that all of them are working together for the sake of the future. Men like Pete work and fight for the sake of the children, to whom the future belongs. They’re fighting for freedom, and for the future, and no one is really dead if he has worked for the sake of this future. Pete is being given the chance to pay off to the future what he owes for being part of the past. Chastened, Pete goes back to earth, gives Ted and Dorinda his blessing. But Dorinda has just told Ted she can’t marry him because she’s still in love with Pete. Discovering that Ted is about to be sent out on an extremely dangerous flying mission, she steals his plane, goes to blow up a Japanese air base, and just about gets out alive thanks to the encouragement of dead Pete. As she lands back at the air base, she gets out of the plane and runs into Ted’s arms. Pete says, ‘That’s my girl. And that’s my boy’. Cue uplifting music and Pete walking off into the dry ice white clouds which are a near-universal feature of angel films about the family. 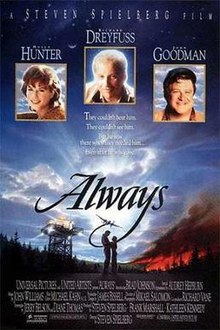 In the Spielberg version, Pete, a daredevil fire-fighter pilot, is constantly getting into trouble for taking risks whilst trying to put out forest fires. He loves his girlfriend, Dorinda, though he feels uncomfortable about expressing affection for her in public, around other men. He buys her a pretty dress, she says she wishes he’d tell her that he loved her. She gives him a choice: they can break up, or she’ll agree to stop flying planes if he’ll agree to take a job training other new pilots, so she isn’t constantly worrying about whether he’ll come back alive. He tells her that he loves her and agrees to take up the training post, but just then he’s called out urgently to fight a fire and he dies. Finding himself alone in the forest, he comes across an older woman, dressed in white, who tells him that although he doesn’t realise it, when he learnt to fly he was helped by the spirits of dead pilots who had gone before him. He was helped, and now it’s time for him to give back. He has to remember that for better or worse, he’s had his life, and anything he does for himself now is just a waste of spirit. He’s sent back to earth, to a fire-fighter flying school, to help a good looking young pilot called Ted who also happens to be falling in (reciprocated) love with Dorinda. He does not take it well, and is summoned back to the angel, who reminds him what she said about his life being over. He’s being given a chance to say, ‘I’m glad I lived, I’m glad I had what I had. Let me give you what I had’. Until he can say goodbye to Dorinda, she won’t be free and neither will he. He needs to learn that to gain his freedom he has to give it. Chastened, he goes back to earth. Ted is called out on a dangerous mission, Dorinda steals his plane, manages to put out the fire and just about gets out alive thanks to the encouragement of Pete. Pete tells her that he loved her, that he knows now that the love we hold back is the only pain that follows us into death. At the end, Dorinda gets out of the plane and runs into Ted’s arms. Pete says, ‘That’s my girl. And that’s my boy’.

Some things are strikingly different between the two films, and others are strikingly the same. It’s kind of remarkable that the gender politics have barely changed in certain ways. Both films are set in eras where women are entering the workforce and taking up traditionally male roles in newly significant numbers; in both films Pete is uncomfortable with Dorinda’s lack of femininity and a bit queasy about her ability to fly planes. Both have plotlines about the importance of realising that we have a responsibility to past and future generations and not only to our own individual selves, though the 1943 film places much more emphasis on the importance of following orders. In both films, Pete loves Dorinda but is wary of marriage, in contrast to Ted who is quickly and publicly effusive about his love for Dorinda.

But a plot setting that makes sense in 1943 seems clumsy in 1989; it’s hard to imagine that the late 80s saw significant cultural masculine anxiety about the likelihood that if they died their girlfriends would fall in love with someone else. But there are a number of other films set in the 80s specifically about men having to make peace with their own deaths In 1985’s The Heavenly Kid  a cool 1960s teenager dies in a game of chicken whilst driving cars towards a cliff, is sent back to mentor a dorky teenager in the 1980s only to realise, eventually, that the child is his own son, though his teenage girlfriend has moved on and married his former love rival. In 1989’s Chances Are,  a young man, recently married, dies in a car crash, goes to heaven, and insists on being sent back to earth as quickly as possible so he can return to his wife. The angels forget to inoculate him so that he will forget his past life. So he grows up, meets and makes out with his daughter before he gets his memories back and tries to convince his former wife that he’s her reincarnated husband. Eventually the angels track him down again and inoculate him so he wakes up, forgetting everything that’s happened, and is at peace with the fact that his ex-wife has subsequently fallen in love with his old best friend and able to give himself over to falling in love with his own daughter (!).

I don’t think these films are actually about death. What all have in common is this emphasis on recognising our responsibility to future generations; making peace with the fact that ex-wives might fall in love and be happy with someone else; and giving up on the desire to hold onto the thrills and dangers of young manhood. I think these are all mid-life crisis films. They’re a grim but probably not an inaccurate reflection of the fact that being a white middle aged man in America is a bit like being dead, if life (and masculinity) are equated with being at the centre of your own adventure, the protagonist of your own love stories. They’re all films about having to make peace with the fact that your role is to be a father, an enabler for the next generation. Your daughter might remind you of your wife but you have to make peace with the fact that she’s going to fall in love with someone else, who reminds you of yourself when you were young; that you’re going to have to spend time and energy training up and coming young men to be the new heros of your workplace; that instead of trying to live vicariously through your children you have to try to encourage them to do what’s best for them. It’s Lee Edelman on steroids, begging you not to buy that motorcycle and run off with a young blonde. You’re basically dead now, all that matters is the children.

View all posts by Marika Rose