Closing out such a productive book event, first I must confess the difficulty of trying to read Blood this summer. In transit for six weeks between cities on opposite sides of this continent, my efforts to read the book were constantly distracted. These were Ramadan nights when my twitter timeline was filled with blood, pictures of blackened faces rubble and the black billowing clouds of hell loosed onto the earth. All (certainly warranted) criticisms of the pornographic consumption of the dead aside, the futility of such witness (perhaps the futility of every such witness, no matter how fervent, never again and the responsibility to protect), this is the evening redness in the west. But Darwish wrote, “we do injustice to Gaza when we turn it into a myth, because we will hate it when we discover that it is no more than a small poor city that resists” (ونظلم غزة حين نحولها إلى أسطورة لأننا سنكرهها حين نكتشف أنها ليست أكثر من مدينة فقيرة صغيرة تقاوم; full excerpt here, trans. Sinan Antoon). And so these lines eventually proved steadying against news of other crimson tides, these lines from the Darwish prose poem titled Hayrat al-‘a’id (“Perplexity of the Returned”) proved a steadying guide (dalalat) to those at a loss in these bloody times (dalalat al-ha’irin), trying to read Blood. Somewhere in that texture there is a pun or at least a tired gesture about Maimonides and Anidjar, namely the power of a line of prosody to exceed itself beyond its context.

Someone (Anthony?) rightly commented earlier that the book resists being disciplined into history or theology or political theory, being utilized and cited to other ends. I can see people working with certain of its close readings (Benjamin, Freud, Melville), folding these moments of the book into their scholarly arguments. Beyond this segmentary approach, I think it’s also possible to respond broadly to its ambition. One example of this kind of work is Kevin O’Neill’s forthcoming Secure the Soul (2015). This decentered ethnography finds Christianity beyond the limits of religion alone, in (indeed making up) the soft security apparatus of postwar Guatemala. Like Christianity, because of Christianity, confounding whatever differences between secular and Christian security, the logics of pious gang prevention show that it is possible to ethnographically demonstrate the idea of an anthropology of Christianity as compulsive — even in the Christian science that is anthropology.

My difficulty of reading Blood this summer abruptly raises the question of reading it among blood, that is, what is the relation between this book and the world, its Christianity and actually existing Christianity. Already Anthony has beautifully answered this question in a way I find entirely persuasive (Blood as index of an archive), and I should note that my question does not have to do with some of the more predictable historical or anthropological lines (what about historical change, what about non-Western Christianities) which I’ve heard raised by audience members at Anidjar’s talks (and which his book itself anticipates and sets aside). It seems clear in any case that while his book intersects with these registers it marks a more immediate claim (a further comment on this below). Rather I am curious first about the figure of this relation. This is a question Anidjar addresses throughout the book, from its opening to its close. My suggestion in short is that the way Anidjar characterizes this relation opens a window onto the formal status of Blood as critique of Christianity. And so although there is a lot more to discuss here, even at the end of this book event, I begin at the very end of the book:

Blood is not quite an object, not a thing either. It is neither old nor new; although it is also that and more. Nor is blood a discourse that would regiment, precisely, the course of blood through the realms of human and inhuman existence … As a ‘metaphor’ that does not relate to a literal term, whose referent is anything but granted, blood is, it should be treated as, catachrestic. (258)

END_OF_DOCUMENT_TOKEN_TO_BE_REPLACED

O precious is the flow
that makes me white as snow;
no other fount I know;
nothing but the blood of Jesus.

Wasn’t life-blood precisely what the settlers sought to pump into what they saw as the overgrown dead body we now call North America? To resurrect the dream of a promised land, a Christian empire? (Of course there was also the rhetoric of taming the wilderness, the savage garden, etc.).  The missionaries carried with them bible-sized bags of lifeblood that they would use to transfuse their white gospel into the veins of sinners: the Indigenous peoples of this land.

O precious is the flow that makes me white as snow. END_OF_DOCUMENT_TOKEN_TO_BE_REPLACED

“For what and where, Derrida rightly insisted, is the archive?” – Anidjar, Blood (241)

I want to understand what kind of text Blood is—what Blood does—in the light of Anidjar’s claim that it is not a book: “I will merely assert that I did not wish for this to be a book.” What does it mean that this text, that gives us the impression of being a book, that has the heft of a book, that has the citational apparatus of a scholarly tome, that has the right organization into parts and chapters and subheadings, that moves deftly amongst a whole range of thinkers whom the papers and the pundits would puzzle at, what does it mean to claim that this text isn’t a book or that he didn’t want it to be? Do we take Anidjar at his word? Do we trust him? What would it mean for us, us Christians, if we are Christians, and Anidjar suggests that we all are covered by the blood, to trust a man named Gil Anidjar? A polyglot, who moves from familiar European languages like French and German to Greek, the acceptable Mediterranean language as an ancient source of European identity, but who also speaks in Arabic and Hebrew and do we detect something of a North African accent, something that would make the ears of border control agents prick up? Suddenly it becomes a matter of distance and boundaries marked by waters littered with rafts and bodies. Marked, of course, by a history of blood. Or perhaps it would be better, in light of Blood not being a book of history, to say it becomes a matter of a story of blood as it is diluted in the sea. The tinnie taste of blood rich in iron flowing out of a body by way of steel and dissipating into a salty sea. But it also a matter of love, of the salt of love, but also the claws of love. “—I remembered you, when I kissed your man face, slowly, slowly kissed it, and when the time came to kiss your eyes—I remembered that then I had tasked the salt in my mouth, and that the salt of tears in your eyes was my love for you (Lispector, The Passion According to G.H., 86-87).” END_OF_DOCUMENT_TOKEN_TO_BE_REPLACED

In The Nomos of the Earth, Schmitt attends to the fact that the sea was always located outside of territorial, juridical regulations, defined as a space that enabled and, indeed, linked the very two “practices” that Kant and Schumpeter saw as distinct and even opposite, namely, we saw, war and commerce. In the naval space … only war and commerce take place. And all that is solid melts into blood. Both the dissolution of space … and the liquefaction of money—its circulation as blood money, under the figure of unification in the blood of Christ—partake of the same logic and of the same transformation. 1

The lawlessness of the sea, its openness and outsideness is the space of transformation and magic. Solids melt into blood, money becomes liquid, and circulates as blood money. I don’t know that there is any clearer example of this magic than the transatlantic slave trade. The dissolution of bodies into blood—differentiated blood—and into blood money. The transformation of black people into property occurs under the banner of the blood of Christ. END_OF_DOCUMENT_TOKEN_TO_BE_REPLACED

Secular Currents and the Infrastructures of the ‘Social’[1]

“Baudelaire speaks of a man who plunges into the crowd as into a reservoir of electric energy. Circumscribing the experience of the shock, he calls this man ‘a kaleidoscope equipped with consciousness’.” Walter Benjamin[2]

Anidjar’s disputatio traverses currents of blood, its differentiation into bloods. Rounding up a plethora of resources, he traces the twelfth century enclosure of life in the Eucharistic Matrix, in the blood. The book, more than an argument, was more of a remembrance. There is a particular unseemliness to blood that makes it almost unthinkable. Remarkably, Anidjar does not impose a program. Rather, the opening of thought to blood follows the latter’s proliferations. END_OF_DOCUMENT_TOKEN_TO_BE_REPLACED

‘Yet who would have thought the old man to have had so much blood in him?’ – Lady Macbeth

In the Summa Theologiae, Thomas Aquinas addresses the problem of the vials of Christ’s blood so plentifully held in reliquaries across Europe. If Christ ascended bodily to heaven, he asks, then where did all this blood come from? Was it left behind when he rose, ascending to heaven bloodless and dessicated as a Eucharistic wafer? No, Aquinas says: rather, ‘the blood preserved as relics in some churches did not flow from Christ’s side, but is said to have flowed miraculously from some image of Christ when struck’. It was not enough, it seems, for Christ to die for our sins once: if we are to have his blood the violence must be visited upon him over and again.

Elsewhere Aquinas considers the ways in which the Eucharistic blood of Christ might be corrupted. END_OF_DOCUMENT_TOKEN_TO_BE_REPLACED

And all the people said, “His blood shall be on us and on our children!” –Matthew 27:25 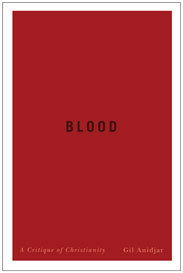 How to introduce a book that asks its readers to rethink the role of Western Christianity? The scope of Blood is massive. On its own terms, it must be, for blood creates the conditions for the possibility of the divisions that it likewise surpasses. Blood is not deterministic, but it has found its way into seemingly every field. Kinship is blood. Modern states argue over land and blood. Money is blood. We assume that blood has always been these things, that it is somehow a natural metonym, but it has not always and everywhere been so. Blood challenges these boundaries and asks why The Christian Question, the questioning of Christian blood, has yet to be raised. But there are other questions, too.

What is the community made of?

Blood examines this question through the emergence of the Christian community of blood. Christianity, in its traumatic history, became a hemophilic cult. “Each and every Christian was transformed into a vessel of Christ’s blood, a blood the devout were given to drink en masse” (90). The mystical body of Christ, through the “eucharistic matrix,” became the visible body of the church, and the difference between bloods, a wholly new partition, was initiated. This body and those other bodies, enemy bodies, contain different bloods. END_OF_DOCUMENT_TOKEN_TO_BE_REPLACED

Later this Summer, we will be hosting the next AUFS book event on Gil Anidjar’s Blood: A Critique of Christianity. We have been looking forward to this book and have put together an exciting group of contributors, most of whom are not regular AUFS authors.

Columbia University Press has generously offered us a copy to give away to a reader. To enter, leave a comment below and post a link to this page on Facebook and/or Twitter. The winner will be contacted via the email address provided when commenting on this page. Giveaway will close tomorrow night, Tuesday May 5th.  Update: Scott has won the giveaway. Thanks everyone for participating!

Meanwhile, check out this roundtable discussion on the book: