Since Angela Nagle, author of the Zero Books title Kill All Normies, has begun writing anti-immigration columns in pro-Trump publications, I thought it would be helpful to clarify my relationship with that imprint. Long story short, there was a complete and total turnover of editorial staff while Creepiness was in production. The new leadership obviously did not share the same values or editorial standards as the founders, as shown by the fact that they didn’t just publish Nagle’s deeply flawed, partially plagiarized book — they publicized it intensively. At the same time, they left “orphaned” authors like me to languish, even though I had already provided two of their previous bestsellers.

I had to do my own publicity for years, with very limited success, because I was told that they had no resources. So to see them finally put some effort into marketing for such a deeply questionable book was infuriating. Meanwhile, the New Yorker had requested a review copy of Creepiness and COULDN’T GET AN ANSWER from the publisher. They ignored a request from the New Yorker! I had to personally send them one of my author copies. When I complained about this situation, the new editor — who is now on record as saying that they don’t do editing and hence Nagle’s plagiarism is fine — offered to make it up to me by hooking me up with a podcast interview with a little-known Zero author. I declined.

So if anyone wants to paint me with a guilt-by-association brush here — you have your answer. They disowned me completely before I even realized what was happening. 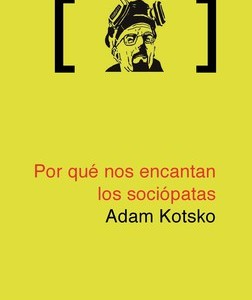 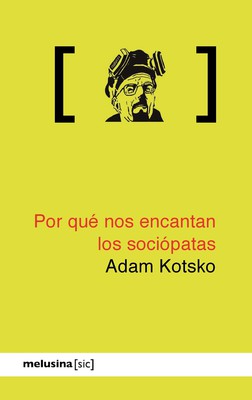 Why We Love Sociopaths has been translated into Spanish. I like the cover image, complete with Walter White and his gas mask. Extract and TOC available at the link — it’s a strange sensation to read my own words in translation, after having spent so much time on the other direction. Thanks to Albert Fuentes for what I can only assume is excellent work.

Gerry Canavan has linked to a nice article on why Americans’ high school years seem to shape them so disproportionately. It’s worth a read, though I think it might still lean a bit toward the more sensationalistic and dystopian vision of high school that American culture fetishizes.

I recognize that the experience can be very difficult and even traumatic for some people, particularly those with non-normative sexual identities. Yet these dystopias are not about people with such obvious “problems” — they are precisely about what the culture at large regards as “normal” people. And this of course means mostly white people: all the mainstream cultural fantasies related to the black or Hispanic high school experience are fantasies of a white teacher swooping in to save them, and this includes even The Wire.

If those of us who are broadly “normal” look back honestly on our high school years, I imagine that most of us would find that it looks more like Freaks and Geeks or My So-Called Life than like the “classical” pop-culture high school with its clearly-defined groups, its ruthless status competitions, etc. — a time characterized above all by confusion and unusually intense emotions. What does it say, though, that those shows, universally regarded as truer and more realistic than standard high school fare, were lucky to make it through a single season?

In other words: Why is our cultural fantasy one that puts forward high school as a non-stop reality TV show? END_OF_DOCUMENT_TOKEN_TO_BE_REPLACED

Over my visit home for Christmas, I saw snippets of several movies focusing on the theme of the workaholic dad who doesn’t understand the true spirit of Christmas. One widely-known example is Jingle All the Way, in which the former governor or California [sic] stars as a father seeking to find the hottest toy of the season on Christmas Eve, having shirked his duty to buy it earlier. The movie opens with him making sales calls and missing his son’s karate event as a result — simply part of a broader pattern, we are meant to understand. I didn’t wind up seeing the ending, but I assume that Arnold was ultimately made to submit to the totalitarian demands of Christmas.

What I’d like to see is a movie in which workaholic dad sits his son down and says, “You know what? I’m not really interested in your karate thing or what specific toy you’ve decided you want for Christmas. END_OF_DOCUMENT_TOKEN_TO_BE_REPLACED

The experience of creepiness is, at its most fundamental, the experience of an excessive, asymmetrical demand — someone is demanding something of us that we cannot and do not want to reciprocate.

The privileged field of creepiness is of course sexuality. END_OF_DOCUMENT_TOKEN_TO_BE_REPLACED

A couple years ago, I wrote a piece called On Male Culture, wherein I proposed that one of the best things men could do as feminist allies was to become internal critics of male culture. As I have taught feminist texts this semester in my social sciences class, it increasingly strikes me how much awkwardness vs. sociopathy maps onto typical ways of talking about women’s way of relating vs. men’s — relationality vs. hierarchy, connection vs. separation, etc. — as well as onto queer theoretical notions of straight male identity as defined by its very unattainability and its continual vulnerability (hence making the identification with the overwhelmingly male “fantasy sociapath” a perpetual temptation).

From this perspective, the fact that I wrote Awkwardness using all male examples (most controversially, Judd Apatow films) seems to make more sense. END_OF_DOCUMENT_TOKEN_TO_BE_REPLACED

[Note: This post talks about plot points in a television show you might be meaning to watch!!!]

Boardwalk Empire may turn out to be the last child of the classical era of the “high-quality cable drama.” Like Mad Men, it is a descendant of The Sopranos with an eye for period authenticity. Unlike Mad Men, however, Boardwalk Empire is just coming into its own — the ending of the last season announced a new ambition and daring, and the current season seems on pace to fulfill that promise.

Nevertheless, there are limits to the creative possibilities in a “high-quality cable drama,” particularly one saddled with the genre conventions of a mafia story. END_OF_DOCUMENT_TOKEN_TO_BE_REPLACED

I was recently interviewed for the Italian journal Studio by Anna Momigliano, who talked with me about Why We Love Sociopaths. (It is in Italian, but was conducted in English.)

My post yesterday about last seasons of “auteur” shows reminded me of something that’s bothered me for a long time: what’s the deal with Tony’s multi-episode dream when he’s in the coma in the first half of season 6? Feel free to castigate me in comments if you all had it figured out already, but it occurs to me that it’s the clearest possible example of a “meta” statement that detracts from the actual narrative — the sole function is to say that if we (the audience) dream of being Tony Soprano, his deepest dream is to be one of us.

This fits well with the theory that The Last Psychiatrist proposed as an alternative to my sociopath thesis: if what is appealing about Tony is his absolute and unshakeable self-identity, his radical self-consistency, his fantasy is to be a bumbling awkward guy who somehow fails to match up with his publicly recognized identity. From another perspective, if the men watching wish they could have constant access to casual sex like Tony does, Tony wishes he was the kind of guy who just couldn’t bring himself to betray his wife even in the most favorable possible circumstances.

Again, I’m sure my astute readers had already figured that out. If so, consider this a Sopranos open thread.

I’ve come to the conclusion, as I’m sure many of you have, that Mitt Romney is the “least bad” Republican presidential candidate, both out of the primary field and in comparison with Bush and McCain (much as Paul Ryan must be grudgingly conceded to be a “less bad” VP pick than the frankly demonic Dick Cheney and the total loose cannon that was Sarah Palin). What alarms me about this is my rationale: not that he’s actually more moderate than the other options, not that he supports better policies, etc., but precisely because he seems like a completely nihilistic opportunist. In short, when it comes to Republicans, it seems like the best argument is “at least it’s not an ethos!”

I don’t know quite what to make of this comfort I take in Romney’s nihilism, in his seeming willingness to humiliate himself in every possible way in the service not quite of “power,” but of the simple fact of being president. He’s like a living reductio ad absurdam of my thesis in Why We Love Sociopaths — the fact of striving as such is somehow admirable or reassuring, but instead of “doing whatever it takes” in the sense of skillfully manipulating everyone, having people killed, etc., he’s just flagrantly lying in an easily traceable way.

Yet I wouldn’t be surprised if there was a certain “sincerity” to his disavowal of Romneycare, for instance — precisely because he never cared about the policy one way or another and just wanted to take credit for some kind of big achievement that would help his personal brand as a “moderate Republican who comes up with sensible solutions,” a brand he unceremoniously ditched once it proved detrimental to his presidential ambitions. He’s so sociopathic that he’s willing to throw himself under the bus.

Still, there’s something deeply disturbing about this infamous video where Romney seems genuinely offended that his Democratic opponent would accuse him of being less than 100% pro-choice. On a first, “naive” viewing, we have a man who has bravely broken with his party and is outraged that his sincerity would be questioned. But when we rewatch it in light of the fact that he totally reversed his views within a couple years, perhaps the offense is at a different level: “What the fuck do I have to do to convince you people that I’ll say and do whatever it takes to hold office?”